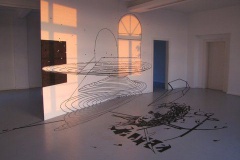 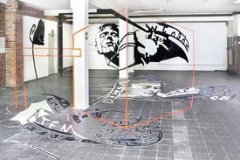 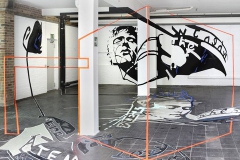 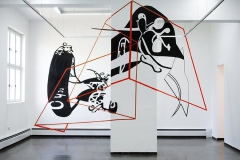 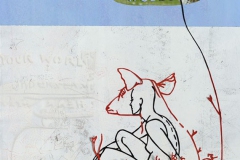 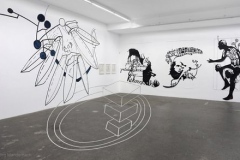 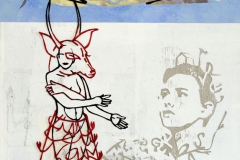 Since 1993 I work as a painter and draftsman. Since 1998, I have been exploring the possibilities of extending drawing and painting beyond the surface into the space.
In exhibitions, which are often constructed as a complete installation, the site-specific drawings and paintings can be overlaid by ceiling-high paper-cuts and trick-film projections.

I often take inspiration for my work from my own sketches and photos, as well as various found pictures, from those torn from periodicals through Internet images to still shots from films.
My work gives me the chance to respond to the flood of images that pours over me. I try to interpret in graphic art, in drawings, and in paintings the unconnected images that often exist in seemingly parallel worlds; I transpose them into a web of relations that, for me, is new in form and content and possibly poetic, as well.

My current subjects revolve around the question of the perception and changeability of identity and the accompanying metamorphoses. In real and virtual space, between imitation, staging and supposed authenticity, nowadays all doors seem to be open when looking for one’s own identity. At the moment I’m working on a series of small-format cut-outs, which I extract from magazine covers (I call them Cover-Cuts). Because of the identification potential of the cover model, the selected magazines (Vogue, Rolling Stone, InterView, etc.) offer numerous links to the questions at hand.

Both by painting over and overwriting my own texts as well as by cutting away large parts of the covers. The cohered parts of the covers dissolve – at the same time, the over painted parts and texts are highlighted. Fading and becoming are opposed.
One of the things that interests me thereby is how this procedure can release pictures (or images), which are usually already mediated, from their often stereotypical pupation (or clichéd concealment) so that they might take on an original, surprising character again.

The sitespecific drawings and -paintings are essentially developed during the work process and in relation to the conditions of the room and to turn these conditions into a component of the pictorial networkIn these works, for example, I am interested in how the movement of viewers in the room can be taken into account with regard to a changing perception of the image. On the one hand, by image fragments being spread across walls, projections or columns in such a way that different overlaps and overall images appear, depending on the change in the viewer’s position in the room. On the other hand, the fact that certain motifs, executed as anamorphosis, turn from abstract pictorial elements to something representationally readable.